Aston Villa have continued with adding more experienced players to the team this summer. 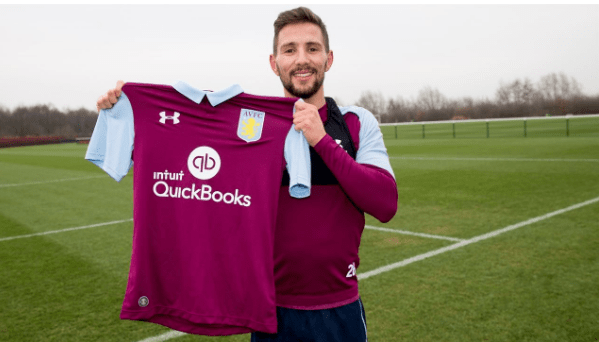 The 33-year old Whelan agreed to a two year deal. He has 336 caps for Stoke and has featured 81 times for the Republic of Ireland. The player joined the Potters from Sheffield Wednesday in January 2008 for £500,000. He scored six times in his stay there, including the famous 90-minute equalizer at Villa Park in 2009.

Samba, 33, left his Greek employers Panathinaikos earlier this year. He spent his pre-season with the club before agreeing to a year deal. He has experience playing for Blackburn and Queen Park Rangers. He moved to England to play for the Rovers from Hertha Berlin in 2007. He netted 18 times in 186 games for Blackburn. END_OF_DOCUMENT_TOKEN_TO_BE_REPLACED

Aston Villa have been linked with a potential move for Hull City’s Ahmed Elmohamady following the Tigers’ relegation from the top flight.

The Egypt international previously plyed his trade under Bruce at the KCOM Stadium before the latter switched clubs due to a disagreement over the transfer plans last summer.Elmohamady, who currently has two years left on his contract, admitted in February that he was gutted by the Englishman’s exit, but wishes him well on his fresh challenge at Villa Park.

“He’s a big manager, one of the most experienced in England, and it was very, very disappointing when he left,” he told The Guardian.

“The fans were disappointed, the players were disappointed, but it was to do with the board and you can’t do anything with it. He’s doing a great job now with Villa so I wish him all the best, and I don’t know what is going to happen in the future.” END_OF_DOCUMENT_TOKEN_TO_BE_REPLACED

Aston Villa kicked off their 2016-17 English League Championship campaign by suffering 3 defeats, 7 draws and only 1 victory from their 11 initial league matches.

It’s because of this slow start of the season that Aston Villa was drowning in the bottom spots of the 2nd tier English League.

For the past few weeks, Steve Bruce and his squad have started to collect more points on a consistent basis and have slowly been recovering from their underwhelming start of campaign.

The latest league match of Aston Villa saw them claiming a 2-0 triumph over Wigan Athletic in a match that was played on March 18 and this victory was their 5th triumph out of their 6 latest games. END_OF_DOCUMENT_TOKEN_TO_BE_REPLACED

Steve Bruce has come out to defend his signings as the team’s woeful performance continues.

The Villa boss has supervised five losses in the last nine games despite starting with a stellar record of seven games undefeated. The coach defended his signings, saying any that joined the club and prospective ones were capable of handling the pressure at a club like Aston Villa before they were signed.

Three straight losses without any goal is threatening the fine start of the manager. The FA Cup exit, the 13th spot on the current Championship log and 10 points off the play-off spot is a bad omen for Bruce who might also get evicted from his seat as Villa are desperate for the quickest return to top flight English football.

“If there’s been a falling, we’ve just bought and bought and bought. It’s just piled and piled and piled that has not improved. But we are a big scalp. Everyone wants to beat us in this division. I have to be 100% right that the people who we are bringing to the club can handle playing for Aston Villa, Bruce was quoted to have said. END_OF_DOCUMENT_TOKEN_TO_BE_REPLACED

Aston Villa defender JoleonLescott is currently in talks with Scottish side Rangers for a possible move before the end of the transfer window. The player who has signed a new two-year deal with Aston Villa last season has yet to make an appearance for them this season and might be interested in moving to Rangers.

JoleonLescott has some good experience of the Premier League and European football after having played for both Everton and Manchester City. Rangers will benefit from having a player of this quality in their team. JoleonLescott has also played for the England team where he has made 26 appearances.

It is believed that Ranger’s manager Mark Warburton has traveled personally to meet the player and has presented him with the current vision of the club. Warburton believes that Lescott will add some experience at the back and may help Rangers compete in the Scottish league. He stated that he has always been an admirer of the player and that he believes that the player can play for a few more years at the highest level.
END_OF_DOCUMENT_TOKEN_TO_BE_REPLACED

Aston Villa forward Jack Grealish said that he wants to do everything he can to help the team get back to the Premier League.

He said that he is ready to fight for the team, and he wants to become an inspiration to others. He believes that if each player put their strength together and show determination on the pitch, they will be able to make it back to the Premier League.

Jack Grealish was only a peripheral figure last season where he only managed to make 9 appearances for the team. However, he is desperate for change this season and wants to form part of the core players that will bring the team back to the Premier League.

He acknowledges that he is not a great leader off the pitch. He is not someone that will raise his voice on the pitch or in the changing room, but he wants to show the way by improving his performance on the pitch. He said that he is an attacking player and that the only way for him to contribute and inspire others is by scoring goals and creating assists.
END_OF_DOCUMENT_TOKEN_TO_BE_REPLACED

Recently relegated English Premier League club, Aston Villa are gearing up for the biggest summer of spending in the club’s history, according to owner Tony Xia.

The Chinese tycoon revealed his plans for Villa on Wednesday in a live Q and A session with CNN on their Facebook page in which he detailed the large financial commitment the new investors are prepared to make.

Dr Xia, whose deal to buy the club for a reported £70million is waiting to be ratified by the Premier League and the Football League, made it clear that Villa will spend big on transfers this summer to be reinstalled among England’s elite. Dr Xia told CNN:

“We have a deposit, more than £100m cash in an account in England.

“We aim to be promoted in one season. That’s the major task for next season. We hope we can do it.”

Just last summer Aston Villa spent £55m in one of the clubs most expensive-ever transfer windows, even though they were later sent to the championships with their relegation which is the first since 1987. Still that amount is just over half of what could be the investment in 2016, if the plans go through. END_OF_DOCUMENT_TOKEN_TO_BE_REPLACED

Aston Villa fans were angry after yet another poor performance from their team.

Indeed, Aston Villa who has already been relegated from the Premier League produce an unconvincing performance in a match where they lost 4-2.

The interim coach, Eric Black stated that he understands the Villa fans reaction as they have witnessed a miserable season for their club. He added that they have every reason to behave like this and that he does not want to tell them what to do.

Even the Southampton manager, Ronald Koeman felt sorry for the Aston Villa players and said that he has never witnessed such an atmosphere when playing away. Indeed, the fans did not come at the stadium to support their team but rather to vent their anger.

Each time a Villa player had the ball they were booed by their own supporters. It was tough for the players to perform in these conditions but this is what happened when you play poorly for a whole season. Only Ashley Westwood, Jordan Ayew, and Alan Hutton was cheered by the fans as they recognized these players were giving everything they have for the club. END_OF_DOCUMENT_TOKEN_TO_BE_REPLACED

Aston Villa boss Remi Garde witnessed his team suffer a sixth consecutive loss in the league during the weekend.

The 1-0 defeat against Swansea City may have just confirmed their relegation to the Championship. It has been on the cards for quite a while now, as there has been no signs of a fightback from Villa even after the appointment of the Frenchman. The last victory that the club had in the league was back at the start of February. The loss against Swansea was a result of yet another poor piece of defending by the club.

Goalkeeper Brad Guzan was largely at fault for conceding the solitary goal scored by the home team. Fernandez came up with the only goal of the game just minutes after the players stepped out from the half-time break. The manager refused to criticise his goalkeeper amidst reports that he will be sacked as the manager in the next few days. There have even been astonishing reports of the club going back to Tim Sherwood, who was sacked in the first place to bring in Garde. There are just seven games left in the league campaign and Villa are a whopping 12 points away from safety. END_OF_DOCUMENT_TOKEN_TO_BE_REPLACED

Mark Hughes reckons if the finishing had been slightly better, Stoke City would have been able to beat the Premier League toppers Manchester City by a much bigger margin than it actually did.

Stoke City secured a 2-0 victory in that home game which not only helped them move slightly up and make their way towards the top half of the points table, but, also made sure that City lost the top position and came down to third.

The defeat of Manchester City benefitted Leicester City which is now at no. 1 in the League standings, a couple of points clear.

Speaking in the press conference after the game was over, Hughes said, “The game plan was there, but, it had to be executed and I must say, the execution was pretty good today. It was overall an exceptional show.”

“It would have been a bigger win if we had been able to convert all the opportunities that we created, it would perhaps have turned embarrassing for City.”

“But, two-nil is not a bad margin to win by when you are up against a top team. At the start of the day, we would definitely have taken that. So, we should be happy.” END_OF_DOCUMENT_TOKEN_TO_BE_REPLACED